In this dark-lit thicket
where trees have fused and rocks
grow green with rain, the badger goes.
Watcher of man; dreamer of earth,
striped headed totem of England,
you remember the night Arthur came.
He heard you sifting the soil
in your old man’s coat and black stockings;
long faced guardian of our realm.

He stood at the mouth of the sett
where your clan ghosts roamed the tunnels.
You watched him plant his sword
and slump here in this glade,
his shirt of mail glinting on his back.
Rose hips drip like blood on the branches.
Generations gone and now you twitch
at the marksman’s shadow, the blades
of light in the trees; still you guard
his crown deep in the burrow,
dull and cold on a bed of leaves. 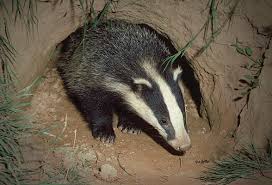 The summer of Bruce

When it comes to Bruce, it’s all about the power and the glory, the hope and the dreams. These are the sort of words that come up when people ask you what the fuss is all about. It’s also about jangling rock and roll, wild soul singing, stinging guitar solos and drums that make you think the stadium is collapsing around your ears.

Bruce spent a significant portion of his summer touring the cities of Europe like a one man EU trade delegation, and if ever a continent needed cheering up, it’s Europe with its youth unemployment and economic woes. I was lucky enough to catch him twice (thanks to friends Mark and Stephen) and I was able to remind myself why I’ve played his records at all my life’s significant moments – after getting my GCSE results (Born to Run) before my driving test (Cadillac Ranch) arriving in my Student Room (Out in the Street) before I got married (The River) before my son was born (Walk like a Man). So it was good to catch up with the man himself.

Coventry was a rain swept experience with some frustrations as well as plenty of highlights. Events were a overshadowed further by the fact that it was the same day we heard James Gandolfi had died and fellow actor and Bruce Right Hand Man Steve Van Zandt wore a black bandana. Managing what should essentially be a party under this double rain cloud was a potentially difficult trick to pull off. Such melancholy fare as Seeds, Trapped and Long Walk Home, requested by the die hard fans down the front, while stirring stuff, confused some of the more casual fans and held up the show a little. ‘I’ve got no idea what’s going on, ‘ confessed one baffled Brummie near me, ‘I’ve only got the best of.’

Wrecking Ball and Death to my Hometown (whose anti banker vitriol and stomping power chimed with the crowd) brought the gig back on its feet and the entire Born to Run album that followed was hard to argue with. I’d never heard the full electric Thunder Road live, and it was a thing of awesome beauty. My voice started to shred as I sang along, but other voices around me carried it home as the rain poured down. We Are Alive was another winner – a superb piece of song writing telling the story of America in forgotten voices singing from beyond the grave. With some crowd pleasing Born in the USA selections (with the title track back at its bombastic best) as well as belting folk sing-alongs Shackled and Drawn Pay and Me My Money Down (where he impersonated the crowd’s collective ‘British ass’ inviting them to ‘shake me!’) the battle was eventually won.

In contrast, Bruce at Hard Rock Calling, on a hot summer night next to the Olympic Stadium was how the man is meant to be appreciated. Uninhibited by rain or bereavement, this was foot on the floor party central. Disposing of Badlands and Prove it All Night early on – in other circumstances the culmination of a show – Bruce laid on a feast of rock and roll. Johnny 99 was a soaring highlight, recast from the Nebraska album as a kind of Status Quo meets Woody Guthrie protest rocker. It’s hard to explain but the towering, electrified performance of one of his best songs was the gold standard for me.

Bruce‘s announcement: ‘You get the Born in the USA album start to finish’ was greeted with the kind of reception you would otherwise get in an office if the boss walked in and announced he was giving everyone the day off. While most Bruce fans, rarely play this one anymore, hearing I’m Goin’ Down and No Surrender live is to experience the kind of delirium you might only otherwise get if England won the World Cup and you won the lottery all on the same afternoon. Yes, Bruce is all about being over the top.

As the sun set over the silver Olympic Velodrome and the strings of Jungleland rang out, I remembered what all the fuss was about. Bruce is about the triumph, the joy and the glory, as well the courage to get back on your feet. He banishes fear and makes everything possible. Of course, like any drug, the effects wear off after a while, but then you are left with the enduring miracle of how a 63 year old man can lift the spirits of an entire continent. As Joe Strummer said, it’s ‘a public service announcement – with guitars!’