Thank you to everyone for their good wishes on the launch of the new collection, The Fool. We had a brilliant time on Saturday at the Derwent Poetry Festival and the warmest of welcomes from Alex McMillen and his team.

Matlock was at its most beautiful, resplendent in autumn colours; red, orange and gold leaves lined the pavements and leather clad bikers roamed the streets eating candyfloss and ice creams. I arrived just on time to run the poetry workshop having been stuck behind a traction engine being run by two ladies in oil spattered dungarees.

The workshop participants worked incredibly hard and came up with some extraordinary pieces – including poems about John Lennon on the Moon, JFK in a brewery and Mohammed Ali in old age. I joined in and wrote a poem about the Queen writing her autobiography in Siberia. See below.

At the reading itself we were treated to a feast of poetry and poets from England, Ireland, the US and beyond. Fiona from Ireland was particularly good with feisty poem about French food.

As it was so close to Remembrance Sunday, I closed my set with a poem from memory: Seigfried Sassoon’s Everyone Sang, which my ten year old daughter and I have been learning together. I was only saved from disaster by a kind poet in the front row who knew the words and was able to give me a prompt. Thank you, whoever you were.

She wears a cloak of bear-skin,
in her hand the pen of the old king.
The story must be told and this
is where she will tell it: Siberia
where the snow plains are as blank
as an empty page. At the door,
the Corgis’ coats are frozen hard.
The windows are jewelled with frost.
Outside, her footmen sip vodka
and watch for the ghost of the Tsar.
Her memory thaws, her hair darkens
and soon there is the scratch of a nib,
a line of trees and she is at Balmoral
at Christmas, walking with her father;
the smell of pine and tobacco.
Up ahead, in the trees is a stag
with his ancestral crown. The wind
blows through and she feels its hand
at her shoulder, turning the page.

I am inside the walls of the palace garden.
A quiet path is lined with flowers; a policeman
takes my papers and peers into my face.
London’s only heron guards the branch of a tree.
A cardinal, a general and a Buddhist monk
confer on the corner, sipping lemon barley water.
We join them and stare at the back of the palace;
as if being allowed to peek behind a magic mirror.
The summer house floats on a sea of grass.
Inside a Corgi made from wicker bathes in sunlight.
The ghost of Queen Victoria moves from guest
to guest, listening quietly, her shadow flitting
from group to group, admiring the hats and frocks.
The Beefeaters appear in yellow and scarlet
with pikes and flowers around the brims of their hats.
They stake out the grounds and divide the crowds.
Two brass bands compete from opposite ends.
they alternate like the two parts of a Swiss clock;
When one finishes, it lowers a flag; the other
raises theirs and strikes up the National Anthem.
A lady made from paper and lace sings along
in a whispered contralto. Rick Wakeman bows
his head then looks up, scanning the skies for rain.
The Queen is tiny, but beautiful in purple and pearls.
She watches the crowd without a smile, thinking
of the distance between the steps and her tea.
The Duke wears an old smile and a pink carnation.
He returns a grey top hat to his head. We take tea:
mint and cucumber sandwiches; chocolate squares
with a coat of arms on a chocolate button. A teacher
wraps hers to show the schoolchildren the next day.
We stand on the steps, as if at the end of a wedding day
warming the flats of our hands on the stone wall.
To my left, Edward VIII, looks out at the garden,
a silver shadow of himself, as if he has stepped
from a news reel, thinking of everything he must
give up; how love has made him a ghost of history. 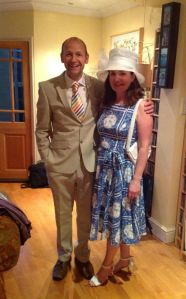