A belated tribute to Chris Froome’s third triumph in the Tour de France. With apologies to the French. I mean only goodwill!

I set myself a little challenge to write a big band number. The trouble is, I’m missing a big band. So with four strings and a little enthusiasm, I’ve done my best. Your imagination can do the rest. Hit it! 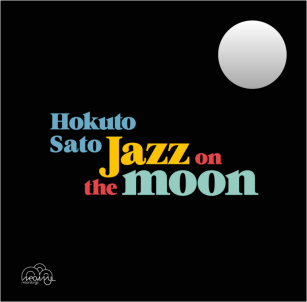 The Wedding of the Year

We appear to be having some sort of seasonal confusion at the moment. On 1 November here in the UK it was 22 degrees centigrade and we were lounging about in the sun.

As we kicked through the autumn leaves in our t-shirts, this got me thinking about what would happen if one season got married to another. Naturally it would result in The Wedding of the Year. Enjoy!

Happyland – In Broadstairs with The Ghost of Charles Dickens

Thanks to the generosity of friends and family, my wife and I celebrated our 40th birthdays in Broadstairs, Kent. That is not to suggest that they sent us away as a deliberate ploy to avoid spending the day with us! It was a literary birthday present of the best possible kind.

For those who don’t know it, (and I’m loath to make it more popular than it already is) Broadstairs is a glorious sun-drenched spot, bursting with pubs, bookshops, more pubs, ice cream parlors, fish restaurants and a great surfing beach.

We stayed in Bleak House, the imposing, fort like construction over looking Viking Bay where Charles Dickens wrote David Copperfield. As an extra treat, we slept in Dickens’ own bed, which was reputedly also slept in by both Queen Victoria, and ‘Mr Slash’ from Guns and Roses, although we assume not at the same time.

After 5pm, we also had Dickens’ study, in the next room, all to ourselves. While my wife was powdering her nose, and draining the complimentary sherry, I went in and sat in the dark at the great man’s desk looking out at the moon over the bay.

Behind me on the walls were yellowing posters, play bills, manuscripts, pince-nez, paper knives and other assorted Dickens paraphernalia. It was perfectly quiet except for the distant brushing of the waves on the beach. Suddenly the door closed and the latch dropped with a loud click. The temperature seemed to plummet and I fully expected to feel Dickens’ hand on my shoulder. 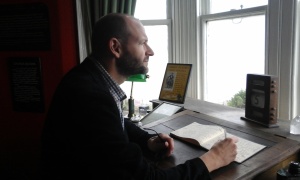 That night there were fireworks over the beach, a 1920s flapper party going on in the function room below and the whole episode inspired this silly jazz-age number which I send out by way of a thank you to the delightful hotel staff, for the pals who subbed our memorable trip and to Charles Dickens for the inspiration. Gawd bless him!

I’m currently reading Cherry-Garrard’s riveting account of the 1910-1913 Terra Nova expedition, The Worst Journey in the World. It’s written in the most elegant prose, with plenty of gripping detail and captures that great spirit of noble hope that characterized the whole enterprise. 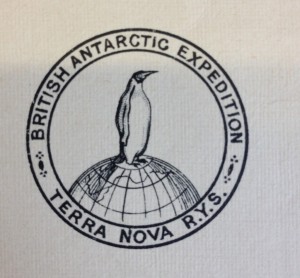 From motor sledges falling through rotten ice to killer whales almost gobbling polar photographers, it reminds you that there was a great deal of incident beyond the central drama of the doomed five man pole party. Almost every member of the expedition was involved in some astonishing drama of their own. And of course the expedition was not just some desperate lunge for the Pole, but a floating university, with a huge agenda. There were almost as many scientists aboard as sailors.

I’m currently working on a poetic sequence about this, more of which later, but for now, I have cooked up a little song as an interim tribute to these gallant men.

The Uke of Wellington – My second ukulele LP

In October last year, I released my first ukulele LP, In the Plink. (Q****) Since then, U2 and I have been in secret talks to ensure that the release dates of our new albums do not clash. I’m pleased to say that these talks have ended happily and I will be releasing The Uke of Wellington today.

The Hot Club of Bohemia

The Scarecrow in the Rain

Neither Here Nor There

If you like what you hear, tell your friends and perhaps even buy a copy of my latest book, The Fool. Be good, be kind, have fun, eat plums.

It’s a little known fact that the Duke liked to unwind by playing the greatest hits of J.S.Bach on his humble uke to sing his dear horse Copenhagen to sleep each night. The ukulele is now kept in the Tower of London. His famous pastime is remembered each year by the players at the Uke at the Duke on the second Tuesday of every month in Shoreham on Sea.

The Hot Club of Bohemia

I discovered the great jazz violinist Stephane Grappelli in the most roundabout way, through his collaboration with Paul Simon on Hobo’s Blues, which appeared on Paul’s first solo album. It’s well worth checking out for its springy rhythm and stylish exuberance. I’ve written my own homage to the golden era on of the Paris nightclub with my song: ‘The Hot Club of Bohemia.’ Enjoy both tunes!

It’s extraordinary to think that the rich and famous once had nothing better than to float over our cities in magnificent silver airships. In the 1920s and 30s these were the ocean liners of the clouds. They had opulent dining rooms, grand pianos and even their own post offices. The dream ended of course, with the Hindenburg disaster of 1937, but what a romantic notion while it lasted; the spectacle of such a Leviathan drifting through the heavens must have been truly awe inspiring. So awe inspiring in fact, that I wrote this song!

Such was the popularity of the craze that the Empire State Building was once going to offer its services as a docking station. The idea was that the airship would be tethered to the spire while the passengers indulged in a little retail therapy downstairs.

I found myself uttering this wonderful phrase the other day without having the least idea what it meant or where it came from. Research has proved inconclusive; some believe it relates to the fact that bees carry pollen back to the hive in little sacs in their legs (what a great evolutionary development; do you think we will eventually evolve built-in Sainsbury’s carrier bags?). Others say the phrase was part of a general trend of ‘flapper talk’ denoting something good. Eg. ‘The cat’s whiskers’, or ‘the dog’s proverbials’. Regardless, it immediately sounded like it needed to be the title of a song. So here it is! Thank you to Joe (and Roberta) for the fantastic Matisse-inspired bee image.

In Praise of the Allotment

Apparently the popularity of allotments shot up when The Good Life first aired in the UK. The antics of the much-missed Richard Briers and the wonderful Felicity Kendal conjure up a dream of self sufficiency, healthy living and optimism: in fact all the reasons people still grow their own today.

Allotments are resurgent again, with people recognizing not only the economic advantages of tilling your own scrap of earth but the the dietary and health benefits too. There’s no better exercise for the body and mind – and it’s no secret that gardeners live longer and happier lives. 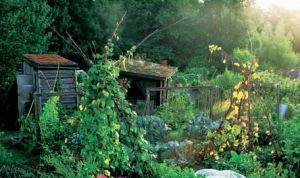 For more allotment inspiration, watch Mike Leigh’s Another Year where the allotment represents sanity and stability, when the world crumbles around you.

In the meantime, here’s my new song, Allotted Time to celebrate the allotment, a Great British Institution.